The history of the croquette

Home » Inspirations » The history of the croquette

From chic appetiser to snack for all.

The first writings about it can be found in Nicolas de Bonnefons’ ‘Les Délices de la campagne’ back in 1655. That is where ‘rissoles à frire’ are mentioned. Pasties rolled in breadcrumbs, fried or deep-fried. Filled with savoury ingredients. Served as a side dish, main course or as an appetiser. Risolles variations are found today in Portugal, Ireland, Poland, Brazil, New Zealand, Australia, and Indonesia.

In 1691, François Massialot, the head chef of the nobility in the era of Louis XIV wrote his famous cookbook ‘Le cuisinier roïal et bourgeois’. Massialot, who can be called the archetypal father of the croquette, wrote in that cookbook about the ‘croquet’ and not about the French word croquette.

The word croquette that was added to the French language in France in 1835. The croquette had a rich filling, was wrapped in breadcrumbs and deep-fried in lard (pork fat). Croquer is the French word for ‘nibble’.

In 1830, a handwritten cookbook with croquette recipes can be found in the Amsterdam University Library. The croquettes are named 3 different ways: croquettes, kroket croquant en gehakjes (croquettes, croquette croquant and small minced meatballs). Fillings with shrimp, sweetbreads, beef and veal become the standard.

The croquette that was first eaten as a chic appetiser in the times of Louis XIV. Croquettes became increasingly more affordable and became more and more of a simple snack and a popular food of the folk.

Celebrity chefs and Bertyn are nowadays re-evaluating the croquette. Chefs fill them with expensive ingredients. Sophisticated and chic croquettes are finding their way to their guests this way. Bertyn makes the croquette organic, vegetarian and especially delicious. So that everyone gets to enjoy them.

The vegetarian Jersey Cheese Mini Croquettes from Bertyn are packed with flavour and are artisanally made. On the inside you’ll find a delicious creamy ragout, prepared in flavouring stock, and […]

The vegetarian Vegetable Croquettes from Bertyn are packed with flavour and are artisanally made. On the inside you’ll find a delicious creamy vegetable ragout, prepared in a flavouring stock, and […]

The vegetarian Jersey Cheese Croquettes from Bertyn are packed with flavour and are artisanally made. On the inside you’ll find a delicious creamy Jersey cheese and on the outside a […]

The vegetarian Oyster Mushroom Croquettes from Bertyn are packed with flavour and are artisanally made. On the inside you’ll find a delicious creamy oyster mushroom ragout, prepared in a flavouring […]

The vegetarian Jersey Cheese Mini Croquettes from Bertyn are packed with flavour and are artisanally made. On the inside you’ll find a delicious creamy Jersey cheese and on the outside […] 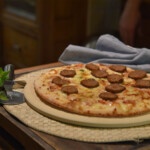 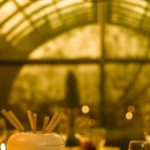 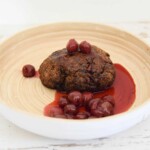 “Even if we never manage to convert the world to the vast majority of meat replacements, one product remains decidedly hopeful: the Manitoba wheat and soy sauce-based, traditionally produced seitan manufactured by Bertyn. It brings together the two qualities required if you justifiably want to call a product a ‘meat replacement’: it is pure and natural and very tasty. It is on sale in health food shops, vacuum packed as seitan steak, seitan supreme or in ‘block form’. It is easy to prepare: the seitan is baked, steamed or cooked in a flash because it never requires lengthy cooking times. So from now on no restaurant has a valid excuse for not putting such a vegetarian dish on the menu.”