Baked Potato with Spinach and Veggie Mince for the BBQ

You can also choose to bake the potatoes in the oven instead of preparing the baked potato on the BBQ. Just follow these steps:

Read more about the Bertyn products that were used in creating baked potato with spinach and veggie mince for the bbq. 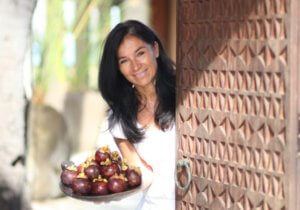 The healthy recipes of Chantal Voets are organic, vegetarian and worldly!You can still eat Burgundian with a weekday organic world cuisine! Her healthy recipes reflect a pure kitchen with lots of fruit and vegetables, without meat and fish, with a nod to ecology (not plastic!) and fair trade. . The recipes she has collected have actually emerged over many years.Whether you are a vegetarian or only occasionally eat vegetarian food: the recipes from Chantal Voets will impress you..