When some people think of vegetarians, they think of something very exotic. There are still only a few people who have any idea what vegetarianism entails or what the motivation for it is, or are simply not receptive to it. There are many clichés involving vegetarians and vegetarian food. A recent television commercial in Belgium portrayed vegetarians as pale and naive hippies with pimples who only ate raw vegetables such as carrots and celery. There was much uproar, as vegetarianism stopped being a niche interest long ago and is becoming ever more ‘normal’ for us all.

In restaurants it seems as if fully vegetarian dishes are not as readily available, and things such as pasta pesto are still the norm, although wholly vegetarian or vegan restaurants are becoming more common. Unfortunately, culinary schools still do not devote enough attention to vegetable-based and vegetarian cooking, even though this world of herbs, edible flowers and combinations of vegetables and fruits is very inspiring, plus the fact that it spells out the future.

There are a growing number of meat substitutes, such as seitan. Vegetarian recipes can be easily found

One might think that the range of product on offer to vegetarians in places like the supermarket is very limited. But in recent years this is no longer the case, and today it is easier than it has ever been to go vegetarian with numerous alternatives available. There are standard meat substitutes such as tempeh, seitan or tofu, while there are also many othersm, such as grains, legumes and dairy products. In 2013 the meat substitute market was worth around 2.3 billion dollars, with an annual increase of 6.4% forecast. Of course this is still nowhere near the figures attained by the meat industry, but it is a very positive sign.

Why seitan is the perfect meat substitute when you go vegetarian

In terms of structure, Bertyn seitan is barely distinguishable from meat, which is why it is called the prime cut amongst meat substitutes. It has a hearty flavour and spongy meat-like structure when cooked in bouillon. Meat substitutes not only mean variation in your diet, they can also be used in very versatile ways. Seitan itself already provides you with many options, and it is also available from Bertyn in different forms and flavours – steaks, blocks (from which you can cut off your own portions of seitan) and tops (cubed seitan). There are over 8 different flavours presently available – more than enough choice, with a suitable type of seitan available for every recipe. 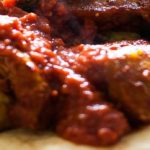 Burrito (or Mexican tortilla) with avocado and seitan, topped off with broccoli

Vegetarian chicory from the oven with sweet chili seitan 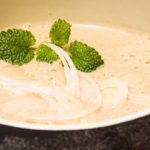 “We use Bertyn seitan in our kitchen because it is really tasty. The new packaging is very attractive too.”