Originally cordon bleu is made from a piece of chicken meat, beef or pork that is filled with ham and cheese. This vegan recipe is not only healthy, but also super tasty, high in protein, low in carbohydrates and fat.

Read more about the Bertyn products that were used in creating seitan and parsnip cordon bleu. 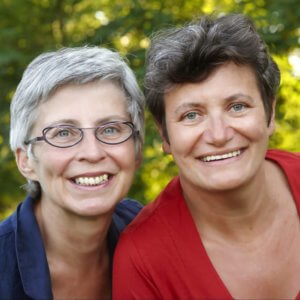 Miki Duerinck and Kristin Leybaert started off by opening a restaurant where they gained a large amount of experience in vegetarian cooking. After that they set up the Vegetarische Kookstudio (Vegetarian Cooking Studio), hosted workshops and offered catering services and celebratory meals. Together they also penned a number of books, including Donderdag Veggiedag (Thursday is Veggie Day), Veggie voor starters (Vegetarianism for Starters) and Veggie burgers, balletjes en broodbeleg (Vegetarian Burgers, Balls and Sandwich Fillers).

“For seitan it is always important for me that it is not made from gluten flour but from well-washed and organic spelt. I have bought and tried many different types of seitan and was never satisfied in terms of consistency, texture and flavour. But your spelt seitan convinced me immediately and I am just thrilled!!” sebastian-copien.de